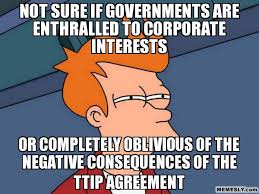 Until now, there has been almost nothing about TTIP in the media, so you can’t be blamed for not knowing what the Transatlantic Trade and Investment Partnership is and how it threatens to affect our lives.

What does a transatlantic treaty have to do with our local campaign?

‘In addition to the prospect of handing over public services to profit-making companies, one of the most insidious effects of free trade agreements such ad TTIP is that it becomes effectively impossible for countries to restore public services if they have already been privatized. […]‘ (p. 25, The Transatlantic Trade and Investment Partnership – A Charter for Deregulation, An Attack on Jobs, An End to Democracy, by John Hilary, War on Want)

TTIP will affect directly and immediately not only our individual health, the safety of our food and environment and our democratic rights, but will do away with the social achievements fought for and won by the trade union movement for generations.

Whatever we think we may achieve by fighting against privatisation and cuts on the local level will be worth nothing if TTIP goes ahead.

Currently there is a growing international and national movement of civil opposition to this corporation power grab: #NoTTIP.

This Saturday 12 July 2014, there is to be a national day of action specifically against TTIP, dubbed “#noTTIP” - the first major action of its kind in the UK, and a sure sign of how TTIP is entering the mainstream. Barnet Alliance will join the day action with an information stall in North Finchley (see below).

Meanwhile, over 100 organisations from 17 EU member states have expressed support for organising a European Citizens’ Initiative (ECI) on TTIP.(source)

Here are a few links to documents on TTIP from organisations such as War on Want and Friends of the Earth:

Currently, negotiations are being carried out in secret to create the largest free trade area in the world, ostensibly as a path to stronger economic recovery after the financial crisis. The emphasis is not so much the removal of tariff barriers (which are currently so low as not to present a hindrance to international trade), but to promote deregulation: removing any barriers that could stand in the way of international corporate interests, such as any laws protecting labour rights, the environment, food standards, and consumer rights.

These barriers to trade also include the tentative regulations governing the banks, which caused this economic crisis in the first place!

If you think that the negotiations in secret sound exaggerated:

In a public relations briefing published in September 2013, the European Commission claimed that TTIP poses no threat to regulations on health, safety, environment or financial security because the “negotiations will be transparent”.

In reality, nothing could be farther from the truth.

In a letter to his US counterpart just two months earlier, chief EU negotiator Ignacio Garcia Bercero confirmed that the European Commission will block public access to all documents related to the negotiation or development of TTIP, and that those documents will remain closed to the public for up to 30 years.9 EU Trade Commissioner Karel De Gucht told the European Parliament that the Commission would approach TTIP with the same level of secrecy as for previous trade agreements, and called on MEPs to support “confidentiality” in the negotiations.

(The Transatlantic Trade and Investment Partnership – A Charter for Deregulation, An Attack on Jobs, An End to Democracy, by John Hilary, War on Want)

If it becomes reality, the Transatlantic Trade and Investment Partnership (TTIP), will be the world’s largest trade and investment deal outside of those negotiated within the World Trade Organisation (WTO).

It has been claimed that the TTIP would lead to £100 billion in extra growth for the EU, and would be “the cheapest stimulus package available”1. However, a recent study commissioned by the UK government concluded that the investment section of TTIP would have “few or no benefits” for the UK. 2 Much doubt has also been cast on the £100 billion figure itself, with a recent study by academics from Manchester and Ghent universities estimating that the likely effect on growth will be a small fraction of this amount.3

In the past, claims that trade agreements would lead to more jobs have proved false.

It was claimed that the North American Free Trade agreement would promote employment in the US, when, in fact over 870,000 jobs were lost.

The European Commission has already acknowledged that the major part of TTIF is to reduce “non-tariff barriers to trade”, i.e. any regulations that could infringe on multi-national corporations making maximum profits, even what that company reckons it could make in the future.

This is an assault on what many organisations have struggled for in order to create a fair and just society.

In an internal paper, leaked in December 2013, the European Commission confirmed that the types of regulation at risk from TTIP would include primary legislation, regulations and directives.

Karel de Gucht, EU Trade Commissioner has confirmed that the purpose of TTIP is to remove regulations on both sides of the Atlantic so that business has a free hand to operate.

Democratically elected governments would virtually be giving up their sovereignty.

If passed as currently planned, the TTIP would be a gold standard model for trade agreements that could be applied elsewhere in the world.

An essential and very alarming part of the TTIP is the incorporation of the ISDS.

ISDS (Investor to State Dispute Settlement) allows any company to take the government of any country to international arbitration committees (not the other way round!) if they consider their profits infringed by any laws or regulations passed by that government.

These proceedings are held in secret and completely bypass and override a state’s domestic judicial system. There is no appeal. The government concerned has to pay the costs, and, if found guilty, face fines that can amount to billions of dollars.

The current arbitration committees are dominated by lawyers from a small number of international law firms according to the International Friends of the Earth Briefing “The TTIP of the anti-democratic iceberg”, just 15 arbitrators have decided on 55% of all known disputes based on investment treaties.

These individuals can and do switch between the roles of legal adviser for private clients and arbitrator. As they are paid by the hour, they have a vested interest in encouraging companies to open more cases!

In practice, ISDS provisions are specifically designed to protect and promote corporate interests by enabling investors to:

- demand financial compensation for breach of a contract or agreement in spite of the domestic right to regulate;

- challenge ‘indirect expropriation‘, when the potential profits of an investment may be reduced because of a regulatory change or other decisions by a public authority (this can include environmental permits, health restrictions on tobacco, bans on energy extraction or pesticides, etc.);

- override a decision made in a domestic court;

- take states to international courts, made up of a panel of commercial arbitrators operating in absolute secrecy, with no appeals process..

The costs of such legal challenges can be extremely high; for example the legal costs incurred by Ecuador in its defence against Chevron amounted to US$18 million.

Chevron vs Ecuador: After years of litigation in Ecuador‘s national courts, Ecuador‘s indigenous people and farmers won a historic victory over Chevron (the court ruling requested that Chevron pay back US$18 billion to clean up the contamination of land and water that resulted from its operations).

The company then turned to the investor-state mechanism under the US-Ecuador Bilateral Investment Treaty to overturn the national judgment and evade compliance.

That arbitration tribunal ordered the President of Ecuador to block enforcement of the previous court orders. Subsequent rulings repeated this demand, arguing that Ecuador had violated the treaty further by allowing plaintiffs to try to seize Chevron‘s assets through courts in Argentina, Brazil and Canada.

These rulings set a dangerous precedent, allowing corporations to challenge the functions of a country‘s domestic court system and the decisions of its duly appointed judges – and they could violate Ecuador‘s constitutional separation of powers.

Here is another example.

Occidental vs Ecuador: Ecuador terminated the contract of an oil concession with Occidental after Occidental sold 40% of its production right to another company without complying with its obligation to seek governmental approval for doing so, as specified in the concession contract. Occidental then challenged the decision, again under the ISDS provisions in the US-Ecuador Bilateral Investment Treaty.

This resulted in the highest compensation ever awarded to an investor (US$1.77 billion), and demonstrates the vast power that tribunals wield.

In times of austerity it is quite obvious that many governments would think twice about passing laws that may fall foul of ISDS, and risk paying fines that could bankrupt a small country

During the course of the negotiations, which started in July 2013, the US negotiators have been quite specific about the area of EU legislation they would especially like to see “deregulated”.

Some examples are listed as below:

The Renewable Energy Directive is also under threat.

As far as greenhouse gas emissions are concerned the European Commission’s EIA states that its preferred outcome of TTIP would result in an extra 11 million metric tonnes of CO2 being put into the atmosphere, thus challenging the EU’s commitments under the Kyoto Protocol.

The US would push for GM foods to be allowed in the EU.

The EU would have to accept poultry that has been treated with chlorine, which is currently banned.

EU controls on endocrine disruptors (chemicals known to interfere with the human hormone system) set maximum contamination levels at a level that block 40% of all US food exports to Europe.

US industry groups are seeking to use TTIP to remove these controls.

Over 90% of beef produced in the US is treated with bovine growth hormones that have been linked to cancers in humans. EU restrictions on the import of such beef have been in place since 1988. In the TTIP agreement US business groups are calling for the removal of these restrictions as “unnecessary” barriers to trade.

What can you do?